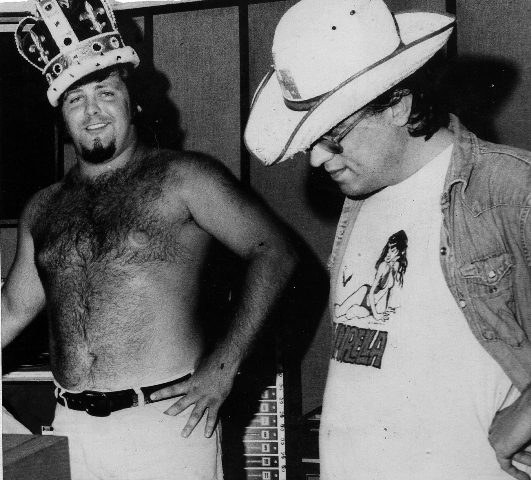 It was 1974 in Memphis and wrestling was the biggest thing in Memphis.
Our phone rang.  It was Barbarian Records' mogul,  Jim Blake, inviting Jim
to come to Ardent Studio- B and co-produce the music for the world's first
wrestling video, "Bad News," on Jerry Lawler, the number one "heel" in
town.   Dickinson made Jerry comfortable in the studio by having him take
off his shirt and wear his crown. The session rocked. It wound down
when Jerry said, "I've got to quit and get something to eat.  If I don't eat now,
I'll puke in the ring."

Countless wrestlers have strutted their stuff to their signature rock
songs with their signature videos, but The King had the first one, thanks to
his friends, Jim Blake  and Jim Dickinson.  Jerry's Saturday morning tv
wrestling show entranced Memphis for years and the whole world tuned in
when he wrestled actor Andy Kaufman.  Who didn't see news clips of Jerry
slap Andy Kaufman out of his chair on the David Letterman show?  If you
didn't see it, you claimed you had.

Lawler moved on to the mighty World Wrestling Federation as a wrestler
and announcer.  On September 10, 2012, he won a four man tag team match,
sat down behind the announcer's table, and keeled over with a massive heart
attack.  He had two stents put in his heart and was sitting up, beaming at the
camera two days later, even though as he said, "I've got more wires coming
out of me than AT&T!"  Yesterday,  he was flown home in a private jet
and was picked up at the airport in a limousine provided by Ardent Studios.

Rock on, King.   Memphis loves you.  World boogie is coming!

Posted by Dickinson Family Blog at 6:54 AM No comments:

Jim and the Replacements

Here was my chance to talk to the great Jim Dickinson-
the man Bob Dylan frequently referred to as "brother,"
the producer of Big Star's Third album, a lifelong intimate
of Alex Chilton, and the man who'd added the funky piano
part to "Wild Horses" in the 1969 Muscle Shoals sessions
that, two years later, became the Rolling Stones' Sticky
Fingers. It was a golden opportunity to hang with a legend,
to learn or at least be a reporter-and yet, while the spirit was
willing, the mind, mercilessly battered by alcohol and inane
chatter, was offline.
Suddenly, a thought whispered. "What was it like
recording the Replacements?" I heard myself asking.
"Well, they walked in, and Paul said, 'We fired Bob-
but don't worry we got it covered."'
That indelible vignette has remained a vivid war story
for me, which made the July release of l’m Just Dead I'm
Not Gone- a live album Dickinson cut in 2006 with his sons,
Luther and Cody, aka the North Mississippi Allstars, such a
pleasure to behold- That the record sounds remarkably clear
and alive for having been recorded in mono made my
reunion with that long-ago morning in Austin complete,
so much so that I had to call Jim's oldest son, Luther who,
besides fronting the Allstars, now also plays guitar with the
Black Crowes.  His dad died of heart failure in Memphis in
August 2009.
"It's just beautiful, the outpouring of love from
people that he touched. He touched so many musicians,"
Luther Dickinson says. "People used to call him in the
middle of the night. People who weren't famous. From the
road. They knew they could call him when it was gettin'
dark, when they just had to talk. You had that one
conversation at South by Southwest and it stuck with you.
He had that gift.
"The way you felt that morning, I felt like that all the
time. We always talked about music and art and records.
As a musician, he was on Sun [Records], he worked with
Sam Phillips, and then Jerry Wexler and Tom Dowd, and
then Lenny Waronker at Warner Bros. He never wanted to
go on the road, so he figured out how to produce."
While he won a national reputation with high-profile
producing jobs for Primal Scream, Toots and the Maytals,
Mudhoney, Ry Cooder, and, most famously, Big Star, in
later life he preferred to make records at his Zebra Ranch
Studio, in Hernando, Missouri, outside Memphis, with local
Memphis artists like solo singer and double-bassist Amy
LaVere and the band Lucero.
"He liked to capture the initial creative spark of the song,"
Luther says. "He didn't want to do preproduction and do a
hundred takes; he wanted to capture the learning process of
the song being born. And he would try and create space.
Songs and music, that's the artist; the space in between the
notes, that was his place."
After Big Star, Dickinson's most famous producing gig
was serving as chief cajoler and disciplinarian for the chaotic
1987 sessions at Memphis's Ardent Studios that became The
Replacements' Pleased to Meet Me.  Being a 'Mats freak, I had
to hear more from Luther about his father's adventures with the
gloriously hazardous quartet, which had just then become a
trio with the exit of founder and guitarist Bob Stinson, who
either quit or was forced out because of substance abuse,
depending on who tells the story.
"They were so ragged," Luther says of Paul Westerberg,
Tommy Stinson, and Chris Mars. "Dad said they couldn't play
when they were sober, and then they'd have a couple of hours
when they were hot, and then they'd get too drunk.
Westerberg never wrote any of those songs down. They were
all in his head. And they would change every take. He would
use every take of Westerberg's lyrics, which were different
every time, and go back and edit them all together. So a lot
of the songs are pieced together from multiple takes of
unrepeated verses.
"Dad's thing was, 'Bring me Bob.' He wanted to call the
record Where's Bob? He felt like he could have helped Bob.
He would teach these bands how to play. These rhythm
sections. He would try. Teach them music history,  rock 'n' roll
history. And give them a sense of self as a rock 'n' roll
musician.  I think that's why people would call him in the
middle of the night "