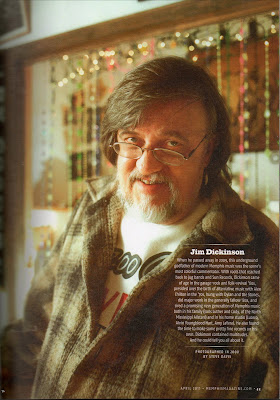 In April, 2011, Memphis Magazine celebrated its thirty-five year milestone with "a lengthy photo essay, one that features thirty-five individuals whose influence, we determined, was critical to the growth and evolution of our city during the period of Memphis magazine existence." Luther, Cody, and I were thrilled to hear that Jim was included in this list of luminaries which included Jack Belz, Steve Cohen, William Eggleston, Kallen Esperian, Shelby Foote, Al Green, Karen Carrier, Henry Turley, J.R. "Pitt" Hyde, Fred Smith, and Justin Timberlake, among others. What an honor for Jim and our family.

Here's what Memphis magazine had to say about Jim:

"When he passed away in 2009, this underground godfather of modern Memphis music was the scene's most colorful commentator. With roots that reached back to jug bands and Sun records, Dickinson came of age in the garage-rock and folk revival '60s, presided over the birth of alternative music with Alex Chilton in the 70s, hung with Dylan and the Stones, did major work during the generally fallow '80s, and sired a promising new generation of Memphis music, both in his family (sons Luther and Cody of the North Mississippi Allstars) and in his home studio (Lucero, Alvin Youngblood Heart, Amy Lavere). He also found time to make some pretty fine records of his own. Dickinson contained multitudes. And he could tell you all about it."

Here's one of my favorite recording of Jim's music- a tribute that Oxford's Thacker Mountain Radio show compiled to honor Jim's work as the leader of their house band, the Yallowbushwhackers.
This is fifty-nine minutes of the most free and joyous arrangements Jim ever recorded. Enjoy!

Posted by Dickinson Family Blog at 6:37 AM