Although the music legend is no longer with us, Jim Dickinson is not about to be forgotten in Memphis, where he shaped the city's sound and made his mark on the music scene for four decades, as the Levitt Shell hosts the Jim Dickinson Folk Festival on Monday, September 19th.
The event boasts a stunning line-up that includes headliners North Mississippi Allstars, Lucero, Mojo Nixon, Jimbo Mathis, and Tri-State Coalition, Sons of Mudboy and Shannon McNally. 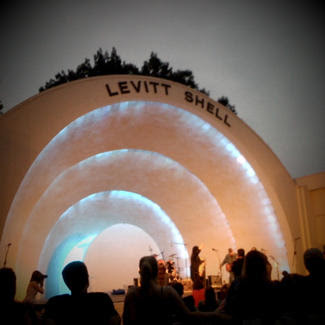 The Jim Dickinson Folk Festival event was first presented at the Shell shortly after he died on August 15th, 2009, and attracted more than 4,000 fans for an entire night of celebration and music.
Best knows as the founder and father of the North Mississippi Allstars, which included his two sons, Luther and Cody, Dickinson's talent included writing, singing, producing, and playing piano. He served as a cultural historian, Sun Studio musicians and enthusiastic collaborator with a wide range of talent. He left his musical imprint through whatever role he played, influencing musicians from Bob Dylan to John Hiatt, Ry Cooter and Alex Chilton. He recorded with and produced greats like Aretha Franklin, Bob Dylan, Big Star, the Rolling Stones, The Replacements, and Sam and Dave.
Folk FEstival organizers are expecting as many or more people than the first year it was held--not surprising knowing how deep his roots run in Memphis, according to Anne Pitts, executive director of the Levitt Shell.
"Jim Dickinson is a great music legend, a wonderful soul and a friend to many," she said. "While we miss him, the power of his music and his spirit definitely live on, especially during the event. As Jim's epitaph says, "I'm just dead, I'm not gone."
Rain date is Tuesday, September 20th.
See Jim's wife, Mary Lindsay, discuss life with Jim and her sons, Luther and Cody, and the events planned to celebrate Jim's legacy by clicking here.
Posted by Dickinson Family Blog at 7:05 PM