The Allstars at the Beale Street Music Festival 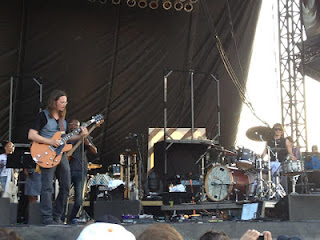 "As in life, time seems to fly by at the Beale Street Music Festival. Not that long ago, the North Mississippi Allstars and Three 6 Mafia were among the festival's fledgling acts, musical upstarts representing the new generation of Memphis music.

But as the 2012 edition of the three-day concert event kicked off on Friday evening, the Allstars and Three 6 had come to occupy a rather different position: the two groups having evolved into Mid-South institutions epitomizing the wide spectrum of Memphis music that's defined the past two decades. Led by the Dickinson brothers -- guitarist Luther and drummer Cody -- the Allstars were in fine fettle on the Bud Light stage as they savored the fading bits of daylight, conjuring an impressive kickoff to the weekend's entertainment.

The band's prodigiously built bassist Chris Chew, who's developed a second career as a tour bus driver, and who will soon be taking a hiatus from the group, was a welcome sight on stage as his rock steady rhythm and infectious presence seemed to galvanize the Dickinsons.

The three-piece combo, aided by a trio of sweet-voiced backing singers, and the odd guest, including British bluesman Ian Seigel, delivered a crowd-pleasing set, carving new filigrees into familiar favorites like "Keys to the Kingdom" and "Let My Baby Ride."

Their performance reached a crescendo as Luther broke out an electric diddley bow -- a distinctly fashioned one string guitar -- and made the instrument come alive to the strains of "Rollin' and Tumblin'" while brother Cody strapped on a washboard; together they summoned the "world boogie" sound their departed father, Memphis producer Jim Dickinson, fashioned as his mantra and legacy, while family matriarch Mary Lindsay Dickinson watched approvingly from the side of the stage"