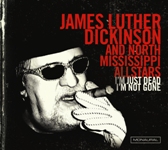 There aren't many musicians who cast as wide a shadow as James Luther
Dickinson.  Around Memphis he was an instigator of countless escapades,
from early days pushing aging bluesmen to the front of the line, then as
keyboard player in the decidedly funky Dixie Flyers and producer non-pareil
of everyone from Big Star, the Replacements, Texas Tornados, John Hiatt and
onward. Some first found out about Dickinson from his aching piano on the
Rolling Stones' "Wild Horses," which opened a lot of doors for someone who
wasn't shy about knocking them down if need be. He was Ry Cooder's
co-conspirator for years, and even ended up on a Bob Dylan album a
decade ago. There was nowhere this man didn't go.

In the '90s his sons Luther and Cody Dickinson kicked up their own sand
after forming the North Mississippi All Stars. Needless to say, the music never
stopped around the Dickinson abode, and as he once explained, he had to
"raise his own band," which the father definitely did. When he died in 2009, Jim
Dickinson had aptly reminded everyone beforehand, "I will not be gone as long
as the music lingers." This live concert recorded at the New Daisy Theater on
Memphis' famous Beale Street in 2006 captures the man and his sons in full
glory, taking a blowtorch to roots music and fashioning something altogether
their own. They had such an instinctual feel for these songs--music that was
almost literally in their blood--that the sound feels like it comes from a down
home frontporch with the ions thick in the summer night and the spirit of
America in the air.

The set list is one that reflects where Jim Dickinson started, with classics by
Sleepy  John Estes, Furry Lewis, B.B. King and J.B. Lenoir to cover the blues
foundation. Then there's songs by Mack Rice, Buffy St. Marie, Bob Frank,
Jerry West and Terry Fell that veer from swampy rockers to country stompers.
Everything comes out with an unstoppable beat and bad boy attitude,
something the Tennessee favorite son came by naturally. With a gruff voice
that commanded complete attention, it sometimes seems like Dickinson might
have missed his calling as a preacher or a politician, but in a lot of ways that's
what he was too. He just did it from behind a piano, and let the notes fall
where they may. There is no denying we won't see his like again, but once
more the Big Man was right when he predicted: he's just dead, he's not gone.
Thank God

Posted by Dickinson Family Blog at 9:07 AM