James Luther Dickinson was a family man. When I told him that my wife, Angela, was pregnant with our only daughter, Emma, he said, “That's what it's all about. There's your legacy.” Of all his musical accomplishments, which are numerous, Jim understood that his real legacy lives in his sons, Cody and Luther.”

Luther, Chris Chew, and Cody are three time Grammy nominated North Mississippi Allstars. Jim produced their albums, 51 Phantom, Electric Blue Watermelon, and Hernando. He confided to Joan Self Selvidge in an interview for True Story Pictures, “I’ll be producing them (NMA) when I’m dead, whether they know it or not.” Jim’s legacy continues with the Allstars earning recent local and international acclaim:

"Hailing from, well, north Mississippi, these Allstars maintain roots in the Bluff City despite their world wide fame. Whether it’s a stint at the Beale Street Music Festival or a cameo appearance at a local college, they’re ready to give- and receive some welcome hometown flavor. "

"Would I want the pressure of being a big cheese on a stadium tour? I see what happens to U2 and who'd want that?" Plant says. "Give me a great theatre and the North Mississippi Allstars kicking things off and I'm gone." 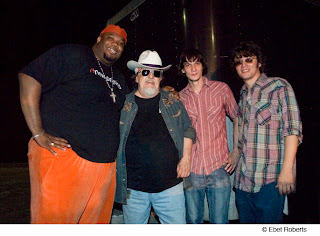