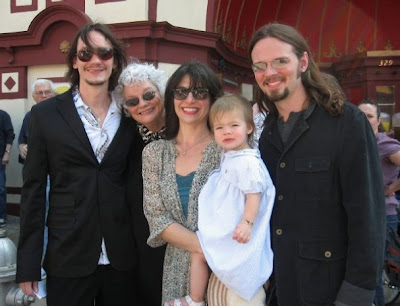 On hand for the unveiling of Jim Dickinson's Brass Note on the Beale Street Walk of Fame were his wife, Mary Lindsay Dickinson, sons Cody (on left) and Luther Dickinson and his wife Necha, and their daughter, Lucia.
Speaking to the crowd, Knox Phillips said he was sure that if Jim was there, he would say, "It's about time." Knox praised Jim's "independent and maverick spirit." With the emphasis on "maverick!"
"You couldn't want a better friend or professional colleague," said John Fry, Ardent Studios' Owner.
"We're fortunate he came our way," said U.S. Representative Steve Cohen..
I'm his wife, Mary Lindsay Dickinson, and I said to the crowd, "God is love. Love is eternal. Jim is with God, co-heirs to God's Kingdom with Jesus. Jim loved us then; he loves us now, still, always, and forever." And in the words of John Fry, "If this offends your political correctness, contact me and I'll forgive you."
"I no longer think only of Jim Dickinson as a guy who makes music like no one else, though that's sure enough true. I think of him and the music he makes as something a lot bigger."
-Nick Tosches
Sweet Peace Within
Posted by Dickinson Family Blog at 7:08 PM