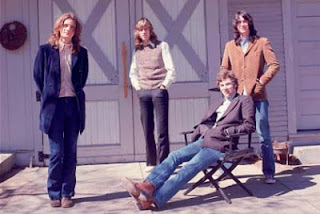 "Having inspired a Grammy-winning box set, international tribute
concerts and now a documentary film, has Big Star -- the Memphis
rock band that achieved legendary status long after the commercia
l failure of its 1970s recordings -- reached the apex of its influence
and posthumous popularity?
"Just as soon as you think it's peaked, it hasn't," said Jody
Stephens, 60, drummer and only surviving member of the
Big Star lineup that recorded the revered early 1970s power
pop masterpieces,"#1 Record" and "Radio City," as well
as the more ghostly final studio album,"Third/Sister Lovers."
Years in the making, the documentary "Big Star: Nothing
Can Hurt Me" has its designated U.S. Premiere as the
opening night "Gala" selection of the 15th annual Indie Memphis
Film Festival. The movie screens at 6:30 p.m. Thursday,
November 1, 2012 at Playhouse on the Square.
Link to the original article by John Beifuss: http://blogs.
commercialappeal.com/the_bloodshot_eye/2012/10/
big-star-nothing-can-hurt-me---eagerly-awaited-music-doc-
has-us-premiere-here-thursday.html"

This is a must-see film for anyone who cares about the direction
of music in the past few decades. Big Star's influence was
seminal and (except for John Fry), nobody's influence on the band
was stronger than that of Big Star Third's producer, Jim Dickinson.

A subject that is not touched on in the movie is what inspired Alex
Chilton to ask Jim Dickinson to produce Third.  I can't answer that,
but I'll never forget the cold winter day when Alex brought
the demos to our house to play for Jim. I was rocking baby
Luther in the next room but I heard every note.  After Alex left,
I came out and looked at Jim.  He read the bewilderment on
my face.  "Don't worry," he laughed. " I can hear exactly where
Alex is going."

Where would American music be without Big Star and Jim
Dickinson's legacy?  It wouldn't be the same.  Big Star
forever changed the direction of pop music.