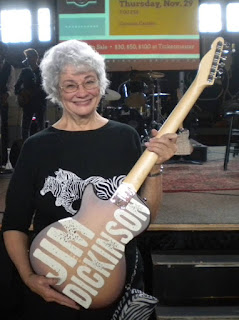 
When dear Jody Stephens announced Jim's name as one of 25 inaugural
inductees in the Memphis Music Hall of Fame as established by the
Memphis Rock 'n' Soul Museum, he was holding this guitar like a regular
guitar.  When he flipped it over there was Jim's name. I felt blessed to be
part of this ceremony on Jim's behalf, as he took his place (in absentia)
with Elvis, Dewey, Sam Phillips, B.B. King, Otis Redding, among
others, as one of the original members of the Memphis Hall of Fame.
John Doyle headed up the group at the Rock 'n' Soul Museum and
in Memphis who worked for years to pull this together.  The Dickinson
family thanks them.  The Warehouse made us feel welcome;  the house
band was rocking; and a great time was had by all at this press release
party.  A larger star -studded celebration will be held at the Cannon
Center in Memphis on  November 29, 2012.
Photograph courtesy of Glenn Goodman