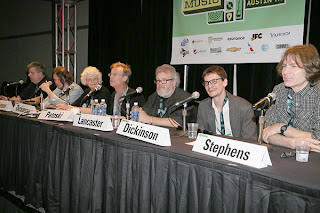 I'M JUST DEAD, I'M NOT GONE: LIFE & TIMES OF JIM DICKINSON
Austin Convention Center, Friday, March 15
Memphis' Jim Dickinson, whether you realize it or not, had been at the heart of rock & roll from its inception until his death at 67 in 2009. Musician on historic records – his piano's on the Rolling Stones' "Wild Horses" – and producer for countless more (Big Star'sThird, the Replacements' Pleased to Meet Me), not to mention rascal and raconteur, this panel's title – his self-composed epitaph – emphasized the truth Dickinson always told, sometimes to his detriment. To know Dickinson and to work with him was to love him, and this chorus of cohorts and loved ones testified by its roster alone: his widow Mary, sons Luther and Cody of North Mississippi Allstars, Big Star's Jody Stephens, Mojo Nixon, studio cohort Jim Lancaster, and panel moderator Joe Nick Patoski, who managed True Believers when Dickinson produced them. As a group, they brought the man's generous, warped, hilarious spirit to life with an hour of anecdotal evidence of his importance. Jim Dickinson's great rock & roll codes: "If it don't shock the parents, it ain't rock & roll!" And, "My job is to protect the artist from the label!" Don't forget, "Never carry more than you can swallow!" Words to live by, all.
Courtesy of The Austin Chronicle
Reviewed By Tim Stegall, Fri., March 15, 2013
Posted by Dickinson Family Blog at 3:13 PM