The Legacy of Jim Dickinson and his musical collaborators continues to weave its way through the fabric of Memphis music as friends and family prepare to pay tribute to the recently departed Sid Selvidge on Tuesday, June 25, at 6:30 PM at the Levitt Shell at Overton Park, Memphis, TN. 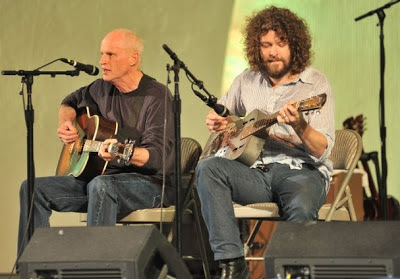 As he prepares to say goodbye to yet another old friend and longtime musical collaborator, percussionist Jimmy Crosthwait can’t help but give a chuckle.

“It’s ironic,” says Crosthwait, who became the last surviving member of the iconic Memphis roots music super group Mud Boy & the Neutrons. The band also included the late guitarist Lee Bake, keyboardist Jim Dickinson and singer-guitarist Sid Selvidge, who passed away last month at age 69. “Anybody who knew us really wouldn’t have put their money on me (to be the last one standing). It’s the damn luck of the draw or whatever, but I am really glad to be able to play with the sons of all these guys.”

On Tuesday, Crosthwait will join the second-generation assemblage Sons of Mudboy — featuring Dickinson’s sons Cody and Luther from the North Mississippi Allstars, Baker’s son Ben, Selvidge’s son Steve, as well as their friend Paul Taylor — at the Levitt Shell as the headliners in a tribute to the elder Selvidge.

A honey-voiced folk singer, record producer, label owner, college professor, and, in the last years of his life, producer of the globally syndicated radio program “Beale Street Caravan,” Selvidge was lauded, following his death in early May after a long battle with cancer, as a gentle, yodeling giant of Memphis music in a league with some of the greats who inspired him growing up in Greenville, Miss.

“I really have been lucky in my life in that I’ve known and at times worked with some really wonderful and wonderfully talented people, and Sid is right at the top of that heap,” says Crosthwait, who intently followed Selvidge’s coffeehouse career in venues like the Bitter Lemon and Procape Gardens before Mud Boy formed in the early ’70s.

“These last years with ‘Beale Street Caravan,’ I think he’s done more as an ambassador of Memphis music to the world than anyone I can think of, and that includes Elvis. Sid did it pretty much on his own. He didn’t have a Colonel Parker and whoever.”

Steve Selvidge says such outpourings of feeling and regard for his father were overwhelming in the days following his death, which was part of the reason the family kept the funeral and memorial private.

“If it had been open, it just would have been too big, too many people,” he says. “But we wanted something where everybody could get together and pay tribute and just have a chance to commune, have a nice night with each other.”

For such an event, the Levitt Shell seemed a natural location. The elder Selvidge, who lived for a time in the nearby Evergreen neighborhood, played there countless times over the years, beginning with an appearance at Jim Dickinson’s legendary First Annual Memphis Folk Festival back in 1963.

His last appearances there came in 2011 when he played the memorial Jim Dickinson Folk Festival with Sons of Mudboy and later was one of the featured vocalists at the Shell’s 75th anniversary concert.
The memorial concert’s lineup, likewise, is full of significance to Selvidge’s life. The bluegrass combo Crawpatch, featuring Don McGregor, was signed to Selvidge’s Peabody Records label in the ’70s.
Also playing sets are bluesman Alvin Youngblood Hart and singer-songwriter John Kilzer, both of whom Steve Selvidge says were among his father’s favorite artists.

And for the night the ranks of Sons of Mudboy will be swelled with special guests, including keyboardist Al Gamble and singers Reba Russell and Susan Marshall. Craig Finn and Tad Kubler, Steve Selvidge’s band mates in the acclaimed indie rock band The Hold Steady, will fly in from Brooklyn to sit in on a performance of the song “My Rival” off the notorious experimental Alex Chilton album Like Flies on Sherbert that the elder Selvidge produced.

Long after the last notes have dissipated at the Shell, however, Selvidge says his father’s tribute will continue in the legacy of music he left for others. Chief among those beneficiaries are the Sons of Mudboy who, after years of unofficial existence finally coalesced shortly before Selvidge’s death into a regular group with a weekly gig on Wednesday night at 1884 Lounge.