Last Saturday, Memphians, musicians and music fans alike, came together to celebrate the 40th anniversary of the Memphis chapter of The Recording Academy.  Given the breadth and depth of music spanning those 40 years (and more), it would be quite a challenge to fit it all into a single evening.  Three hours after it began, it ended in a joyous finale of  the North Mississippi Allstars' "The Meeting"  with all the musicians on stage, much to the delight of both the musicians and crowd.

Larry Nager provided a first hand account of the evening which was published earlier this week on grammy.com (http://www.grammy.com/blogs/set-list-bonus-memphis-chapter-40th-anniversary-celebration-at-levitt-shell)  Many thanks to Larry and The Recording Academy.  There is a nice photo slideshow at the link. 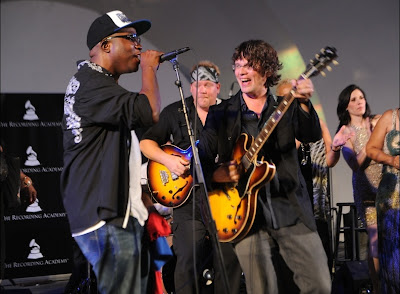 
What started as a celebration of history — the 40th anniversary of The Recording Academy Memphis Chapter — wound up making history, as the all-star concert on July 13 drew the largest-ever crowd at one of the city's most venerable venues, the Levitt Shell in Overton Park, where Elvis Presley played his first major concert on July 30, 1954, 59 years ago this month.

The King has left the building, but his spirit lived on in singer/bassist Amy LaVere's medley tribute to Sun Records, as she performed his first single, the GRAMMY Hall Of Fame-inducted "That's All Right." The performance opened a three-hour concert event that crossed genres, generations and state lines, showcasing the past, present and future of the region's diverse musical culture.

Despite a busy Saturday night that included a Robert Plant concert and a full slate of music on Beale Street, 6,500 Memphis music lovers gathered for a night that featured legendary artists such as Carla Thomas, who, in a rare appearance, sang her first hit, "Gee Whiz" (which was also the first Top 10 hit for the fledgling Stax/Satellite label). She was joined by siblings Vaneese and Marvell Thomas in one of the evening's most resonant performances. Along with the First Family of Memphis Soul, the show featured the Hodges brothers' Hi Rhythm Section — one of the greatest R&B sections ever — as the house band.

The GRAMMY-winning Rebirth Brass Band took the packed crowd down to New Orleans for a funky Mardi Gras, while Lafayette's Roddie Romero and Eric Adcock, of Roddie Romero And The Hub City All-Stars, added zydeco and Cajun sounds, creating a Louisiana-Memphis fusion with Hi Rhythm.

And the man who started it all, Knox Phillips, oldest son of Sam Phillips, whose tireless lobbying resulted in Memphis landing its charter 40 years ago, received a commemorative note on the Beale Street Brass Note Walk of Fame just before the show began.

The "working musician" nature of the Memphis Chapter's leadership was strikingly displayed in a segment introduced by former Chapter President David Porter. "The Presidents" (all one-time Chapter Presidents) featured hitmaking former Chapter presidents backed by Hi Rhythm, from the roots-rock of Jimmy Davis to the sweet soul of Susan Marshall to the hip-hop of Al Kapone. The latter paid tribute to Memphis with "The Music," with surprising accompaniment by a string quartet and a horn section that included veteran trumpeter Ben Cauley, the sole survivor of the 1967 plane crash that claimed the lives of eight people, including Otis Redding. The band also included former Chapter President Scott Bomar (bass) and current Chapter President Lawrence "Boo" Mitchell (percussion).

The North Mississippi All Stars closed the night, getting the crowd dancing one more time to the trio's full-tilt blues-inspired rock. Closing in style, all of the musicians came back for a finale featuring the gospel-fueled "The Meeting."

Many of Memphis' most important musical families were present — the Phillips, Thomases, Mitchells, Hodges, and Dickinsons. But on this unseasonably cool July night, the bonds transcended blood and borders, as rock, blues, soul, funk, country, Cajun, hip-hop, classical, and gospel musicians of all ages and several states — the Memphis Chapter's extended musical family — came together for an unforgettable reunion.

(Larry Nager is a Nashville-based writer, musician and documentary filmmaker. A proud former Memphian, he is the author of Memphis Beat (St. Martin's Press) and the writer and co-producer of the film Bill Monroe: Father Of Bluegrass Music. He has been a member of the Memphis Chapter for more than 25 years.)

The Memphis Dawls
"Son Of A Preacher Man"
"Turtle Dove"

Roddie Romero and Eric Adcock with the Hi Rhythm Section, with Wendy Moten and Stefanie Bolton
"Riverside"
"Party Down"

Carla Thomas, Marvell Thomas and Vaneese Thomas with the Hi Rhythm Section
"The Breakdown, Part 1"
"The Memphis Train"
"Gee Whiz"/"If There Were No Music"

The Bo-Keys featuring Percy Wiggins
"Writing On The Wall"