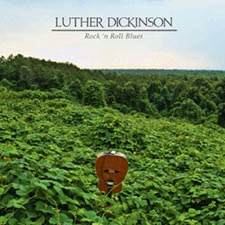 Ray Wylie Hubbard may have described "Rock 'n Roll Blues" best following a session he and Luther did for SiriusXM Radio:

"Now being with Luther Dickinson gives me hope for the future of music. There is an aura about him of deep commitment to honoring the blues musicians who came before and he shares not only his Hill Country Mississippi roots but also his own soul with only the sound of a piece of glass on the strings of a guitar. He is for sure rock and roll blues... and that's the name of his new record coming out next week."

The album is being heralded around the web:

All Music (4 stars):
"Though Rock 'n Roll Blues is autobiographical in nature, it's actually much bigger. Dickinson goes outside himself as music evokes the spirits of earlier generations and the earth that bore them."


American Songwriter (3.5 stars):
"In this climate of over produced, slicked up Americana, Dickinson’s dialed down approach is charming, rustic, uncluttered and delivered with the honesty of a guy who wouldn’t know how to do it any other way."